Due to Tomb Sweeping Holiday, we will be off from Apr. 2nd to Apr. 4th and back to work on Apr. 5th.

Tomb Sweeping Day, also called "Cold Food Day", is the most important day for people to offer sacrifice to ancestors. It started from the Zhou Dynasty, with a history of over 2500 years. Qingming is one of the 24 solar terms in China, indicating the coming of late spring, thus the best plowing and growing time, while "Cold Food Day" is a day when folks sweep the ancestors' tombs and eat cold food. Qingming was adjacent to Cold Food Day, so later on they gradually became one festival, and thus "Cold Food" became another name for Qingming, and dusting the tomb and eating cold food turned into the customs of Qing Ming. Qing Ming has evolved into a culture-rich and meaning-deep remembrance day.

Since people with weak constitutions might get hurt by eating cold raw food on Qingming, when the weather is still cold, various activities were invented for body-building, like stepping-the-green outgoing, swing, Chinese football, polo, willow-planting, tug-of-war, and rooster-fighting, etc.

Since the ancient times, there have been a lot of works of art and poems about Qingming, manifesting the emphasis and passing-on of the Chinese people on Qingming. Of these, Tomb Sweeping Day by Du Mu in the Tang Dynasty is a poem of household fame.

Below are the activities on Tomb Sweeping Day. 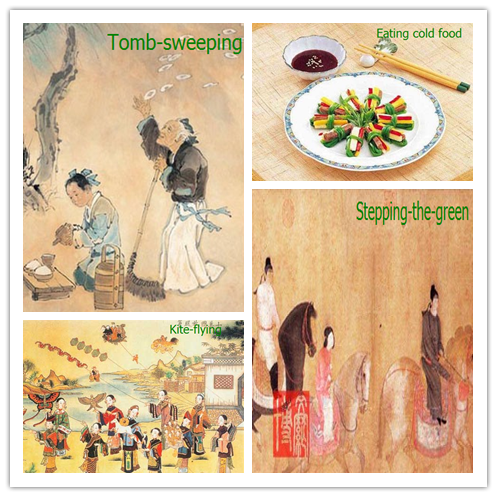 All prices are in USD. Copyright 2020 www.yaspro.com